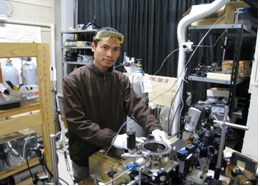 I am Ali Khumaeni, an Indonesian student at Department of Nuclear Power and Energy Safety Engineering, University of Fukui, Japan. I was born in Kendal, Central Java Indonesia on August 7, 1983. I completed my education from elementary school to senior high school in Kendal. In 2002, I entered the Department of Physics, Diponegoro University. I earned my BSc (S.Si) degree in 2006 with a judicium of cum-laude. 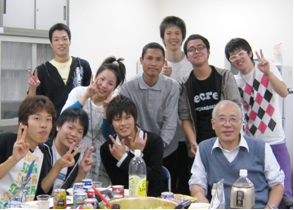 During my study at the Department of Physics Diponegoro University, I conducted a research on laser-induced plasma spectroscopy (LIPS) and its applications at the Maju Makmur Mandiri Research Center (M3RC) under Professor Wahyu Setiabudi and Dr. Hendrik Kurniawan’s supervision. Besides, I have also been involved in a collaboration with Prof. Kiichiro Kagawa of University of Fukui. In 2007, I entered the Department of Physics, Faculty of Education and Regional Studies University of Fukui as a research student. Under the direction of Prof. Kiichiro Kagawa, I directs my research into laser-induced plasma spectroscopy by utilizing the specific characteristics of a TEA CO2 laser. This photograph shows I and Prof. Kagawa laboratory group after performing a party

Since 2009, I have become a master student at the Department of Nuclear Power and Energy Safety Engineering University of Fukui under the supervision of Prof. Hideaki Niki. I earned some awards for his works in the field of laser-induced plasma spectroscopy utilizing TEA CO2 laser. In 2008, I was awarded as the young scientist award for my research on herb medicine and food powder analysis using TEA CO2 laser from the 4th International Conference on Laser Probing LAP 2008 held in Nagoya, Japan. The phtotograph shows when I presented his work at the LAP conference. 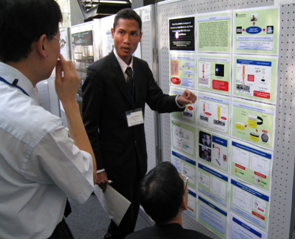 I was further awarded as the 2nd best paper from the 6th International Conference on Laser- Induced Breakdown Spectroscopy held in Memphis Tennessee USA on September 13-17, 2010. In this conference, I presented my paper entitled “Direct analysis of powder sample using TEA CO2 laser-induced metal-assisted gas plasma at 1 atm by introducing the powder particles into the plasma”.

In December 2010, I again got award as the best poster presentation for a category of security analysis using laser from the International Chemical Congress of Pacific Basin Societies held in Hawaii USA. I presented my work on application of laser-induced breakdown spectroscopy for security analysis especially the material in the form of powder present in a minute amount. The phtotograph displays of award ceremony in Hawaii USA 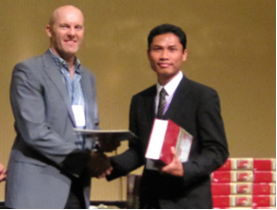 Laser-induced breakdown spectroscopy (LIBS) has recently become an increasingly popular technique for rapid and in-situ qualitative and quantitative elemental analysis of various samples in different forms such as solids, liquids, and gases. In standard LIBS technique, a Nd:YAG laser is directly focused onto a sample surface to induce a strong breakdown plasma, which contains neutral atoms, ions, electrons and molecules ablated from the sample. However, relatively few results have been reported on its applications to the direct analysis of powder samples. 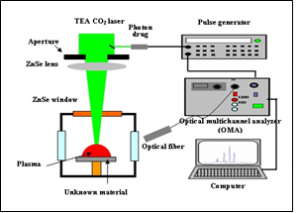 On contrary to the standard LIBS technique above, we found that a transversely excited atmospheric (TEA) CO2 laser is suitable to the analysis of powder sample. Due to the high absorbance of the powder at the long wavelength of the TEA CO2 laser (10.64 ?m in wavelength) and the long pulse duration, the plasma can be initiated more easily and the serious blow-off of the powder can effectively be suppressed. The phtotograph shows experimental setup usually used in our work by utilizing TEA CO2 laser. It should be known that in case of LIBS using a TEA CO2 laser, a large gas breakdown plasma was produced when the laser was focused on a metal surface, while the metal itself was never ablated. This phenomenon never occurs for the case of standard LIBS technique, in which a Nd:YAG laser is most often employed to induce a laser plasma. Based on these special characteristics of the TEA CO2 laser, we have directed our research on LIBS using TEA CO2 laser and developed novel analytical techniques of TEA CO2 laser-induced plasma for atomic emission spectroscopy on powder material. Since 2007, we have published several papers in International Journals including applied spectroscopy, journal of Korean physical societies, American Institute of Physics, Journal of the spectroscopical society of japan, and Current applied physics.