HOME >  About  >  University Emblem and Songs 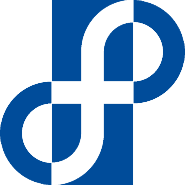 The emblem of the University of Fukui was decided in October 2004, after soliciting proposals from both within and outside the university and taking advantage of an opportunity offered by the consolidation of the Fukui University and the Fukui Medical University.

The emblem consists of two circles combined with the shape of “infinity”. These circles represent the two entities, the Fukui University and the Fukui Medical University, before their consolidation and “science” and “technology” were referred in the University’s Mission Statement. The combined shape expresses the infinite potentiality offered by the new university. The curved portion of the emblem at its center depicts the initial letter of the University’s name, “F”, the blue color symbolizes the “beautiful sea and sky of Fukui prefecture” and “youth and intelligence.” 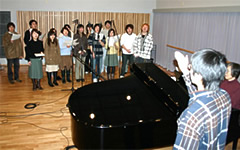