The relationship between Rutgers and UF goes back to KUSAKABE Taro, a retainer of Fukui Domain, who was sent to study at Rutgers as one of Japan’s first overseas students at the end of the Edo period. William E. Griffis, who tutored KUSAKABE in Latin, was invited by the Domain of Fukui to teach science at the clan school Meishinkan. Following their footpaths, the two Universities signed an agreement for scholarly exchange in 1981. After an initial period of fruitful exchange, the relationship continued at a reduced level, until, in 2016, UF set up a new School for Global and Community Studies(GCS). Contacts since then between GCS and the Department of Asian Languages and Cultures at Rutgers led to a strong revival of the relationship. The academic exchange agreement was reinstated in August 2017, which was followed by a visit by the then UF President to Rutgers in 2018, when he signed an MOU for Student Exchange. A similar agreement between the Medical Schools of the two Universities followed in 2019. The exchange now includes interaction between faculty members, lectures on visit, joint online classes, cooperative research, as well as mutual exchange of students and medical interns.

At the ceremony, President UEDA Takanori highlighted the fact that this year and next year mark the 150th anniversary of Griffis’s arrival in Japan and in Fukui. Commemorating this historical occasion, and in an innovative step to overcome the corona pandemic, UF will conduct, on 9 January 2021, a virtual international symposium on the theme of “Griffis’s Fukui @150,” with attendants from both sides of the UF-Rutgers partnership.

Prof. AKASHI Yukio, Vice-President for International Affairs, and Prof. HOSOYA Ryuhei of GCS, who also heads the Kusakabe-Griffis Foundation, were at the ceremony. The Foundation is also working to revive the Christmas Party which was held by William Griffis at his house in Fukui in 1871. This turned out to be the first ever Christmas party to be carried out publicly in Japan. Supported by the “Seven Sisters,” a group of GCS students, the Foundation will build on this tradition to make it into a “glocal” (global-local) feature of Fukui. 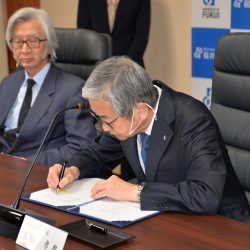