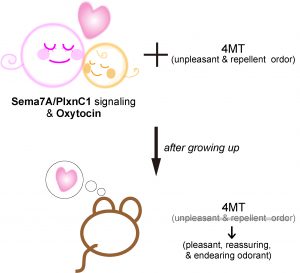 The smells that newborn mice are exposed to (or “imprint” on to use the academic term) affect many social behaviors later in life, but how this happens is still a mystery. Scientists from Japan have now discovered the molecules necessary for imprinting. Their new study sheds light on the decision-making process and neurodevelopmental disorders such as autism spectrum disorders. It also proposes more effective use of oxytocin therapy for such disorders at an early age.

Imprinting is a popularly known phenomenon, wherein certain animals and birds become fixated on sights and smells they see immediately after being born. In ducklings, this can be the first moving object, usually the mother duck. In migrating fish like salmon and trout, it is the smells they knew as neonates that guides them back to their home river as adults. How does this happen?

Exposure to environmental input during a critical period early in life is important for forming sensory maps and neural circuits in the brain. In mammals, early exposure to environmental inputs, as in the case of imprinting, is known to affect perception and social behavior later in life. Visual imprinting has been widely studied, but the neurological workings of smell-based or “olfactory” imprinting remain a mystery.

To find out more, scientists from Japan, including Drs. Nobuko Inoue, Hirofumi Nishizumi, and Hitoshi Sakano at University of Fukui and Drs. Kazutaka Mogi and Takefumi Kikusui at Azabu University, worked on understanding the mechanism of olfactory imprinting during the critical period in mice. Their study, published in eLife, offers fascinating results. “We discovered three molecules involved in this process,” reports Dr. Nishizumi, “Semaphorin 7A (Sema7A), a signaling molecule produced in olfactory sensory neurons, Plexin C1 (PlxnC1), a receptor for Sema7A expressed in the dendrites of mitral/tufted cells, and oxytocin, a brain peptide known as love hormone.”

During the critical period, when a newborn mouse pup is exposed to an odor, the signaling molecule Sema7A initiates the imprinting response to the odor by interacting with the receptor PlxnC1. As this receptor is only localized in the dendrites in the first week after birth, it sets the narrow time limitation of the critical period. The hormone oxytocin released in the nursed infants imposes the positive quality of the odor memory.

It is previously known that male mice normally show strong curiosity toward unfamiliar mouse scents of both genders. “Blocking” Sema7A signaling during the critical period results in the mice not responding in their usual manner; they display avoidance response to the stranger mice.

An interesting result of this study is the conflicting response to aversive odors. Let’s say, a pup is exposed to an innately aversive odor during the critical period; this imprinted odor will now induce a positive response against the innate natural response towards the odor. Here, the hard-wired innate circuit and the imprinted memory circuit are in competition, and the imprinting circuit takes over. To solve this dilemma and reach a conclusion, the brain must have detailed a mechanism of a crosstalk between the positive and negative responses, which opens a variety of research questions in the human context.

So, what do these results say about the human brain?

First, the results of the study open many research questions for the functioning of the human brain and behavior. Like the critical period in the mouse olfactory system, can we find such a period in humans, possibly in other sensory systems? The way the mouse brain chooses imprinted memory over innate response, do we humans also follow similar decision-making processes?

Secondly, this study also suggests that improper sensory inputs may cause neuro-developmental disorders, such as autism spectrum disorders (ASD) and attachment disorders (AD). Oxytocin is widely used for treating ASD symptoms in adults. However, Dr. Nishizumi says, “our study indicates that oxytocin treatment in early neonates is more effective than after the critical period in improving the impairment of social behavior. Thus, oxytocin treatment of infants will be helpful in preventing the ASD and AD, which may open a new therapeutic procedure for neurodevelopmental disorders.”

This study adds valuable new insights to our understanding of decision making and mind struggle in humans and reveals new research paths in the neuroscience of all types of imprinting.

About Associate Professor Hirofumi Nishizumi from University of Fukui, Japan

Funding information
This study was supported by JSPS KAKENHI and the MEXT grants along with the Japan Foundation for Applied Enzymology and the Naito Foundation. 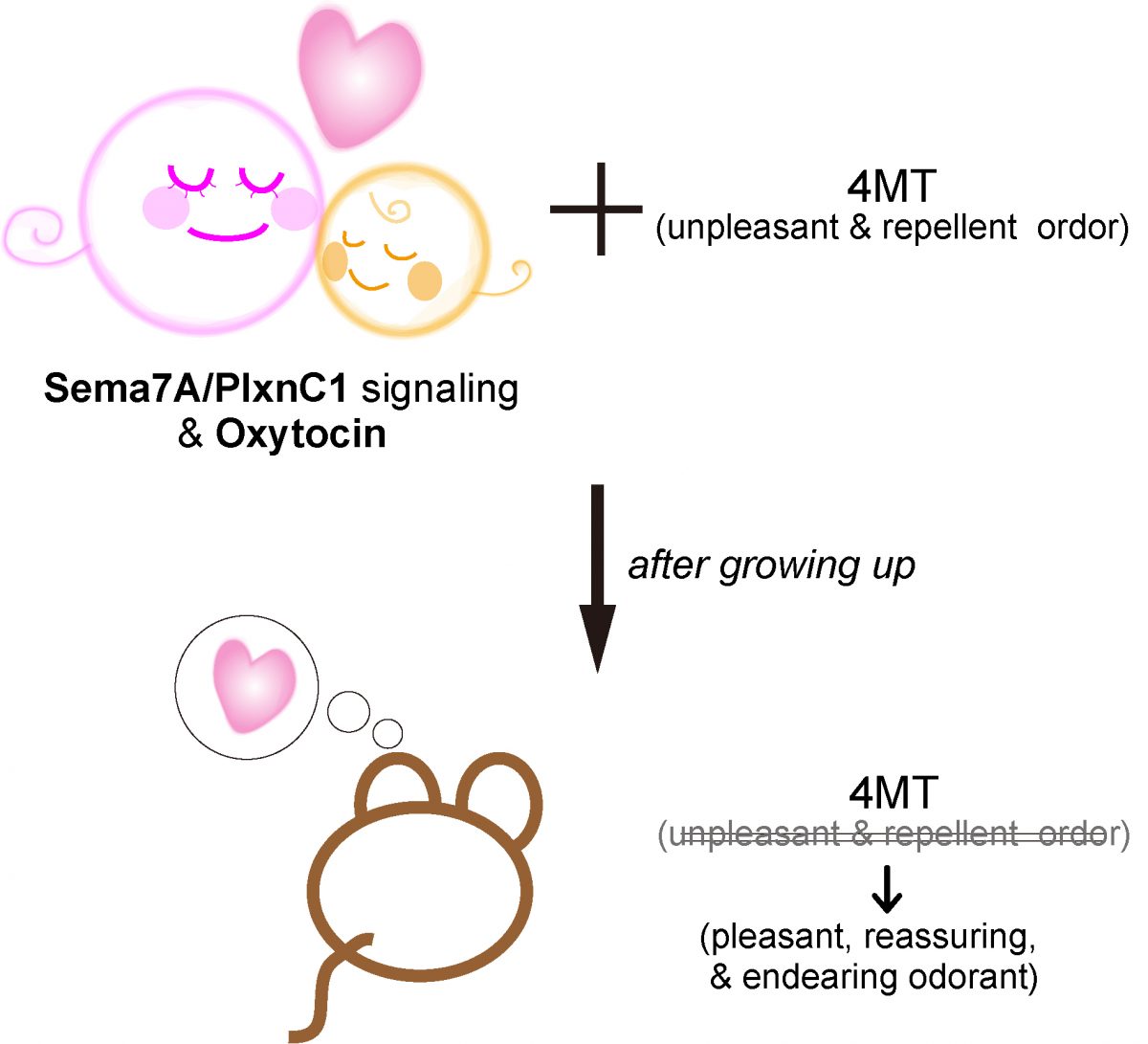 Olfactory or smell-based imprinting is known to affect adulthood odor perception and behavior, but how does this happen? Scientists from Japan have now uncovered the molecular mechanism underlying this phenomenon.
Illustration courtesy: Hirofumi Nishizumi from University of Fukui