Is it Working? Scientists Say Gene Variant Indicates Effectiveness of Immunotherapy for Allergies

Is it Working? Scientists Say Gene Variant Indicates Effectiveness of Immunotherapy for Allergies

Although sublingual immunotherapy (SLIT) has become an effective treatment option for many allergies, about 20-30% of patients don’t respond to SLIT for Japanese cedar pollinosis–a highly common disease. In a recent study, scientists reported that a specific variant of the HLA-DPB1 gene is associated with poor response to this treatment, highlighting the potential of this and similar genes as relevant biomarkers in clinical practice for predicting one’s responsiveness to allergen immunotherapy.

Seasonal allergies are very widespread in certain parts of the world. In Japan, it is estimated that about one third of the population is allergic to the pollen of the Japanese cedar, a native tree species, making Japanese cedar pollinosis one of the most common allergic diseases in the country. Luckily, allergen immunotherapy has progressed much over the past few decades, becoming the closest thing we have to a cure for both seasonal and year-round allergies. In sublingual immunotherapy (SLIT), patients can gradually develop immunity to a given allergen by regularly placing small, concentrated doses of it under their tongue. After several months, a good percentage of patients find themselves reacting much less severely when exposed to the same allergens in their daily lives.

While SLIT is beneficial for most people with allergic rhinitis—that is, those who suffer from inflammation of the inside of the nose after allergen exposure—the treatment is ineffective for about 20-30% of them. Unfortunately, there is currently no way of telling if SLIT will be effective for a patient short of trying it out and observing their response over a period of as long as two years, meaning that 20-30% of patients would have to tolerate all the side effects of the treatment for no benefit, for that long a period.

Against this backdrop, a team of researchers from Japan set out to find a biomarker that could be used to predict the responsiveness of a person to SLIT for Japanese cedar pollinosis. In their most recent paper, published online on 12th February 2022 in Allergy, they report a newly discovered association between a specific variant of the HLA-DPB1 gene and poor response to SLIT. This work was the result of a collaborative effort led by Prof. Shigeharu Fujieda and Dr. Masanori Kidoguchi of the University of Fukui, and Prof. Emiko Noguchi of the University of Tsukuba.

So, what is the HLA-DPB1 gene and why would it be related to one’s responsiveness to SLIT? This gene provides instructions for making a protein that plays a critical role in the immune system: helping it distinguish the body’s own proteins from proteins made by foreign invaders, such as bacteria and viruses. The protein encoded by the HLA-DPB1 gene forms a functional protein complex with the protein encoded by the HLA-DPA1 gene. However, these genes are highly polymorphic, meaning that a large number of genetic variants (alleles) exist. In previous studies, this research team had discovered that certain structural differences in the antigen-binding pockets between HLA-DPB1 alleles could make an individual more susceptible to Japanese cedar pollinosis and sensitization.

This led them to think that there might also be a connection between the alleles of HLA-DPB1 and an individual’s responsiveness to SLIT. To test their hypothesis, they enrolled over 200 patients with Japanese cedar pollinosis who underwent SLIT. The researchers determined the HLA-DPB1 alleles in these patients and conducted statistical analyses to see if they were related to their responsiveness to SLIT. “Our results suggest that patients carrying at least one HLA-DPB1*05:01 allele have an increased risk of being non-responders to SLIT in their second season of the immunotherapy,” says Prof. Fujieda. “This implies that differences in the antigen-binding pocket on the HLA-DPB1 protein may influence the effect of allergen immunotherapy,” he adds.

It is worth noting that this may be the first study ever to find an association between a genetic biomarker and an individual’s response to allergen immunotherapy. Genotyping the HLA-DPB1 gene could serve as a cost-effective biomarker to predict the responsiveness of a given patient to SLIT for Japanese cedar pollinosis, saving valuable time. Moreover, these findings may help researchers worldwide rethink how genetic biomarkers can be used both in research and clinical practice, as Prof. Fujieda remarks: “Our study could prompt updates in current international guidelines and consensus documents on the potential of genetic biomarkers.”

Let us hope immunotherapy keeps advancing until no one has to suffer the consequences of severe allergies. 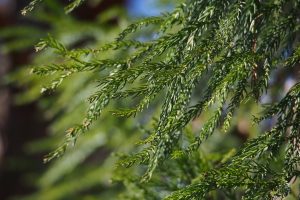 Almost one third of the population of Japan is allergic to pollen from Japanese cedars. Although immunotherapy can greatly alleviate the symptoms in most patients after prolonged treatment, a considerable percentage still do not respond favorably.
Credit: Photo uploaded by harum.koh at Openverse
Usage Restrictions: This image was marked with a CC BY-SA 2.0 license. For reuse, credit the creator and share adaptations under the same terms

Latest Article Publication Date: February 12, 2022
Method of Research: Observational study
Subject of Research: People
Conflict of interest (COI) Statement: Shigeharu Fujieda is an adviser for GlaxoSmithKline, Kyowa Kirin, and Sanofi, and received honoraria from Kyorin Pharmaceutical, Taiho Pharma, and Mitsubishi Tanabe Pharma and research funding from Maruho, Tsumura, Mitsubishi Tanabe Pharma, and Sanofi. The other authors have no conflicts of interest to declare.

About University of Tsukuba, Japan
The University of Tsukuba aims to establish free exchange and close relationships in both basic and applied sciences with educational and research organizations and academic communities in Japan and overseas. While developing these relationships, the university intends to pursue education and research to cultivate men and women with creative intelligence and rich human qualities.

About Professor Emiko Noguchi from University of Tsukuba, Japan
Dr. Emiko Noguchi is a Professor at the Faculty of Medicine at the University of Tsukuba, where she got his PhD in Medicine. Her research interests lie in pediatrics and human genetics, with a focus on asthma, allergies, and their hereditary properties. She has over 140 scientific publications to her name.