The study demonstrates the passage of sodium ions through a potassium ion channel, indicating that they are not as selective as previously thought

The cell membranes of all organisms contain ion channels that permit ions to pass into or out of the cell, and these channels play extremely important roles in fundamental physiological processes such as heartbeats and the rapid conduction of signals along neurons. An important property of these ion channels is their selective conductivity—they selectively permit the passage of particular ions. For example, potassium channels more readily permit the passage of potassium ions than the passage of sodium ions, despite the fact that potassium ions are larger.

Presently, the mechanisms underlying the high selectivity of cellular ion channels remain unclear. According to Professor Shigetoshi Oiki of the University of Fukui, “Ion selectivity poses a fundamental question for understanding the workings of channel proteins”. Now, thanks to the joint efforts by a team of researchers from the University of Fukui and Kanazawa University, led by Prof. Oiki, the scientific community is a step closer to understanding those mechanisms. In a study that is soon to be published in the prestigious journal Proceedings of the National Academy of Sciences of the United States of America, the scientists provide groundbreaking insights into the passage of sodium ions through potassium channels. Their results challenge the long-held assumption of the strict selectivity of potassium ion channels, and may even bring about changes to the basic scientific concepts taught at the college level!

The investigators next worked with computer simulations of the KcsA potassium ion channel to gain insights into the mechanism of how potassium and sodium ions moved through the channel. As expected, their models showed that multiple potassium ions could easily traverse the channel together via a straight path. However, in the case of sodium ions, the models revealed a convoluted passage, with sodium ions taking a tortuous and difficult route full of places where they could become temporarily trapped and eluting out very slowly. These simulation results help to explain why potassium ions traverse the channel a hundred times more easily than sodium ions do.

The team’s findings do more than simply clarify the details of how cell membrane ion channels work. In the words of Prof. Oiki, “We refuted the static assumptions of the strict potassium ion channel selectivity. Our study demonstrated sodium ion permeation through a potassium ion channel and its atomistic mechanism for the first time”. Furthermore, the team’s findings may even have important implications for medical research owing to the existence of ion channel disorders, also known as “channelopathies,” that affect millions of people worldwide.

In time, the findings will “channel” research in new and exciting directions, with important ramifications both for our understanding of basic biology and our ability to treat various diseases! 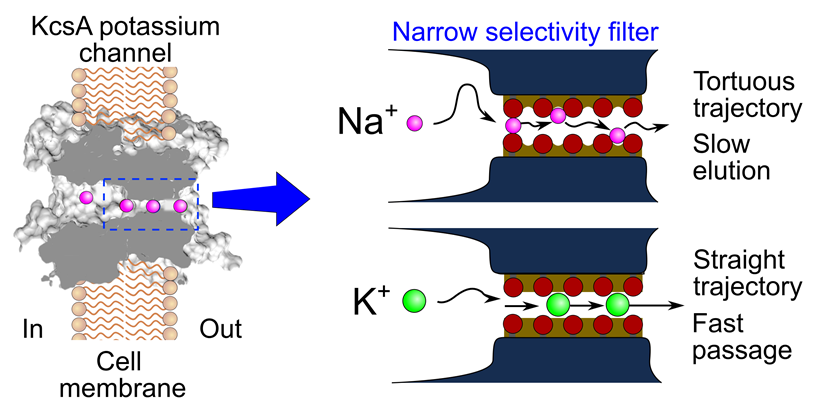 Cell membranes contain channels that selectively permit ions to move into or out of the cell. In a recently published paper, researchers from the University of Fukui and Kanazawa University provide new information that revises the traditional understanding of how selective these channels really are.

Reference
Title of original paper:Conductance Selectivity of Na+ Across the K+ Channel via Na+ Trapped in a Tortuous Trajectory
Journal Proceedings of the National Academy of Sciences of the United States of America
DOI:doi.org/10.1073/pnas.2017168118

About the Biomedical Imaging Research Center at the University of Fukui
Founded in 1994, the Biomedical Imaging Research Center works to promote basic and clinical research on medical imaging based on noninvasive methods involving electromagnetic waves, such as X-rays and gamma rays. Researchers at the Center use cyclotrons and positron emission tomography equipment to visualize the body functions and clinical conditions of patients for diagnosing and preventing disease.

Nano Life Science Institute (NanoLSI), Kanazawa University is a research center established in 2017 as part of the World Premier International Research Center Initiative of the Ministry of Education, Culture, Sports, Science and Technology. The objective of this initiative is to form world-tier research centers. NanoLSI combines the foremost knowledge of bio-scanning probe microscopy to establish ‘nano-endoscopic techniques’ to directly image, analyze, and manipulate biomolecules for insights into mechanisms governing life phenomena such as diseases.